TAD with Rain My favorite Ghouls and Goblins PPF

Hi Everyone!
I am adding this post to Paint Party Friday
I am excited for TAD with Rain. Her theme is Goblins and Ghouls.
Ya know my world. LOL
Did you know?
Ghoul, is Arabic ghūl, in popular legend, demonic being believed to inhabit burial grounds and other deserted places. In ancient Arabic folklore, ghūls belonged to a diabolic class of jinn (spirits) and were said to be the offspring of Iblīs, the prince of darkness in Islam.
Considered female by the ancients, the ghūl was often confused with the sílā, also female; the sílā, however, was a witch like species of jinn, immutable in shape. A ghūl stalked the desert, often in the guise of an attractive woman, trying to distract travelers, and, when successful, killed and ate them. The sole defense that one had against a ghūl was to strike it dead in one blow; a second blow would only bring it back to life again.
Gobblins in the other hand,
originated in the 14th century and are most prevalent in northwestern Europe, Scandinavia, the British Isles, and the United States. The name “Goblin” is said to derive from the Old French spelling “gobelin
Goblins were a race of small and numerous goblinoids common throughout Toril, often living in underground caverns near the surface known as lairs. The race was often, though not always, dominated by other goblinoids, most commonly hobgoblins.
Don't know if this is a goblin or a ghoul or maybe a bit of both.
Possibly bitten by a vampire. (giggle) 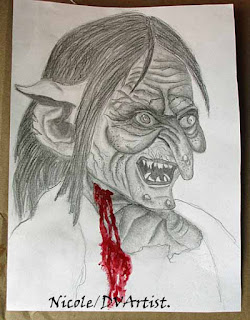 There is a movie called "Insidious"
It's one movie that the monster really scares me.
It is a thrilling feeling to be scared from a movie.
Anyway, the face is this creature is somewhat like this. 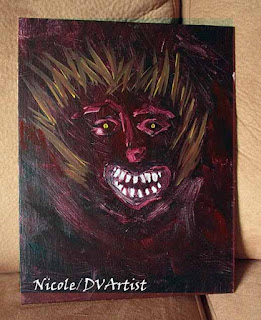 Did you know?
According to Brownlowe, there's a good reason why people like watching a horror movie. "The experience of your brain calming itself down after watching a scary movie is actually neuro-chemically very pleasurable," she says. "That's because the dopamine release related to the 'rest-and-digest' brain response causes an increased sense of well-being
Geesss I should have the most well-being brain on earth.
I watch at least one scary movie everyday.
What can I say I am a FREAK!!! LOL
Here is the creature from the movie "Insidious." 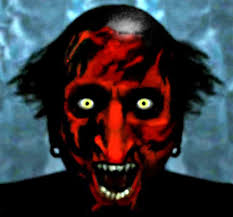 Come by Rain's blog to see what all the other's have created.
Have a great day and watch a scary movie today.
Nicole/DVArtist
Honor and integrity in art, in life.
beadwright.com
at September 30, 2020