TAD Board Games And Game Night

Greetings!
I will be honest I wasn't going to join in today because my old brain just couldn't figure out what to post. As a kid with my 5 siblings, we were like most 1950's home, and played all kinds of board games. When I got old the games I played  the first electric games. I was a champion of Pac Man and won $1,000.00 for a Pac Man competition. So much fun. Later I found my favorite game, Mancala. For some reason this appeals to me and I still play it once in a while on line. 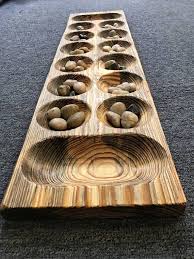 Origin and History of Mancala

Evidence of Mancala games have been found by archaeologists in Aksumite Ethiopia in Matara (now in Eritrea) and Yeha (in Ethiopia), dating back to between CE 500 and 700. The word mancala is derived from the Arabic word naqala, which means "to move." In North Africa and the Mideast, the word mancala refers to a class of game rather than any particular game.

You will see references to the game going back thousands of years. It is a simple enough setup to be played on an earthen surface, with seeds and holes, but the solid archaeological evidence doesn't exist documenting earlier origin.

There are many versions played by nations and peoples throughout Africa, with different names, such as Wari, Warri, Awari, Oware, and Wouri. The game is played in the Baltic areas of Europe but didn't spread through Europe. It traveled with Arab culture and trading to India, Malaysia, Indonesia, and China.

Head over to Rain's to see what all the other game players are doing today.

Be Safe Out There And Wear A Mask

Nicole/DVArtist
Honor and integrity in art, in life.
beadwright.com
at January 21, 2021